You are at:Home»Generic»From Being A Baseball Fan To Following His Wife’s Diet Plan, George Clooney Is All Savage

From Being A Baseball Fan To Following His Wife’s Diet Plan, George Clooney Is All Savage

By Aurobindo Dharsaun on February 9, 2017 0 Comments
Share this on WhatsApp

George Timothy Clooney is an American actor, filmmaker, and activist. He has received three Golden Globe Awards for his work as an actor and two Academy Awards, one for acting in Syriana (2006) and the other for co-producing Argo (2012).

George Clooney has been named PEOPLE’s Sexiest Man Alive twice. The 55-year-old actor may be fast approaching old age, but it surely isn’t the case when you look at him. Starring in several feature films, working out to keep in shape has become one of George’s active lifestyle. But he doesn’t need this reason to do so as his great workout habits is something that’s part of his routine, not only for his career, but for himself personally.

So, how does the Academy Award-nominated actor keep himself fit and healthy? Surely, it has something to do with his healthy lifestyle instead of cosmetic procedures since his charm looks to be natural.

“I do a lot of Aerobics, a lot of dance, there is a lot of JAZZ-ERCISE, The AB-MASTER, there’s the BUTT-BLASTER or whatever it’s called. And also there’s a lot of yoga. ANd I have also just finished doing a movie where I did football with a bunch of 21 year olds which I highly recommend. That’s going to keep anyone in shape.” 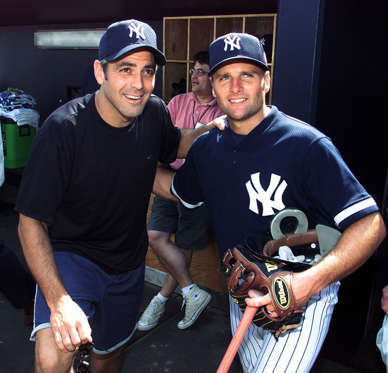 George Clooney (pictured with Chuck Knoblauch during a visit to Yankees’ spring training) was a high school baseball and basketball player in Augusta, Kentucky. Before heading off to college he tried out for the Cincinnati Reds in 1977.

“I could catch anything. I was a great outfielder in high school. But I couldn’t throw well,” he told The Enquirer in 1990. “I wanted to play pro baseball. I thought that would be it.”

His affinity for the Reds never waned and, in 2009, Ellen DeGeneres used Big Red Machine legends Joe Morgan and Johnny Bench to lure Clooney onto her television program at the behest of Clooney’s fellow “ER” star, Noah Wiley.

Clooney’s obsession with watching sports on TV has become a bit of an issue for his lawyer wife Alamuddin.

“I watch sports, and it kills her,” the actor told Lopez. “I got her into March Madness a little, I’m a huge Kentucky fan, so she got into that, but it was enough,” he said, of his wife’s limits. 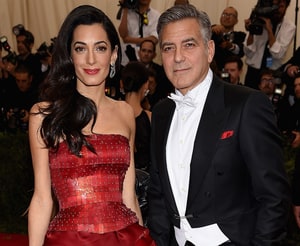 “So the next week was the Masters, and I’m watching that and she goes, ‘So every weekend we’re gonna be watching a sporting event?’ I’m like, ‘Actually that’s how it works,’” the Tomorrowland actor said, laughing.

George’s diet primarily focuses on healthy food. He recently decided to go on a juice cleanse and eat better as part of his New Year’s resolutions, having green juices and salads daily.

A friend of George Clooney was quoted as saying: “Amal told me there are five rules for George’s new eating regime and healthy lifestyle that should get him back in shape as quickly as ­possible. The five rules include no alcohol, no fatty meat and less dairy products.”

Check out: The Sporty Story Behind Bradley Cooper’s Hot-Shot Physique

Share this on WhatsApp
Amal Clooney George Clooney
Share. Twitter Facebook Google+ Pinterest LinkedIn Tumblr Email
Previous Article5 Extreme Adventure Sports That Will Make You Scream For Your Life
Next Article [Quiz] Cricketers And Their Century Stories. How Well Do You Know About The Sport?