You are at:Home»Generic»Greatest Sports-Related Hoaxes Of All Time

Greatest Sports-Related Hoaxes Of All Time

By Aurobindo Dharsaun on October 26, 2016 0 Comments
Share this on WhatsApp

The realm of sports naturally lends itself to guise, trickery and misdirection. But sometimes cunning hoaxes go too far, crossing the line of acceptable sporting behavior and into the realm of fraudulence.

And it’s not just the sport-stars themselves. Fans and writers spread rumors that catch on like wildfire and catch unassuming fans unaware. The following are the most blatant examples of such dumb-foolery that a select few have pulled off on us.

Sports Illustrated (SI) magazine pulled a quick one on its readers when it published the article titled “Who’s That Girl?” The piece was centered on Simonya Popova, a beautiful 17-year-old tennis star from Uzbekistan who was supposed to be the future of women’s tennis and embody the “strength, attitude and sex appeal” so highly valued in the sport.

SI featured a several pictures of Popova in the article, highlighting her sex appeal and strength, but there was one tiny caveat to the wonder girl—she didn’t exist. It was one of those hoaxes.

The pictures of the tennis playing prodigy had been computer generated. The athlete described in the article was merely a composite creation of all the “desirable” qualities that the sport is looking for in a female tennis player.

The author described the perfect female tennis player, and then ended his article with “If only she existed.” Statement made, Sports Illustrated: Tennis is shallow. And we’re gullible. You can find it here.

But, it was no laughing matter as the WTA expressed its utter contempt of the whole incident and sent a strongly worded response to Jon Wertheim. To compete in the intellectually disabled division of the Paralympic Games, a participant must have tested for an IQ under 70. The 2000 Spanish men’s hoops team must’ve missed the memo, though.

After winning the gold medal at the tournament, an undercover journalist found that 10 of the 12 players didn’t fit the disabled description, leaving the team to return the medals and endure complete embarrassment.

And it wasn’t funny for anyone. It takes everything that is nice about of all sports and turns it on the head, to the point when you don’t recognize it anymore. 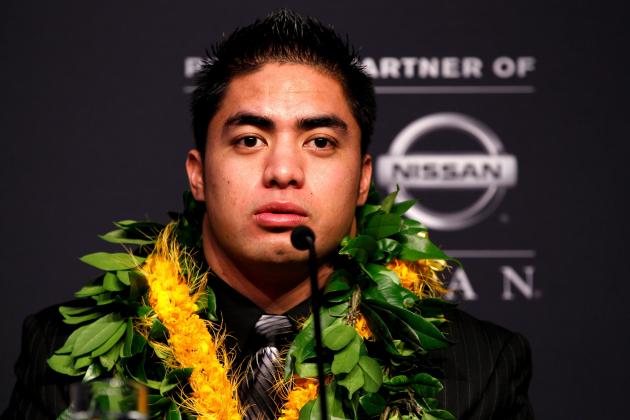 The story of Notre Dame linebacker Manti Te’o losing both his grandmother and girlfriend to cancer on the same day was one of the most heartbreaking and inspirational stories of 2012.

The news of the tragedies that befell Te’o on Sept. 11 of last year sparked a public outpouring of sympathy and support for Te’o. Stories aplenty ran in the media about the death of Te’o’s girlfriend, Lennay Kekua, and the standout season the Notre Dame captain had achieved despite what appeared to be the staggering loss of two loved ones.

But recent events have shed new light on Te’o’s personal life, and an article published by Deadspin.com on Jan. 16 has embroiled the 21-year-old football player in a media frenzy concerning his relationship with his girlfriend—the woman we came to know as Lennay Kekua.

The Deadspin article alleges that Te’o’s girlfriend Kekua was a hoax—a phony person who never succumbed to cancer, wasn’t buried on Sept. 22 and never existed in the first place.

Back during spring training in 2008, the Philadelphia Phillies pulled one of the best hoaxes ever on pitcher Kyle Kendrick, by getting the general manager involved in the prank.

Kendrick was told that he was to be traded to Japan for a player to be named later, and was asked questions by the media about the swap, which caught him completely off-guard.

At the time, Kendrick was still just 23 years old and entering his first full season in the big leagues, so he was a little gullible to have believed what his mates pulled on him. but, his reactions were priceless.

It all started here. It was an unacceptable way to get some publicity and a lot of clicks with zero effort.

Former World No. 1 Roger Federer, who was in Mallorca, Spain to promote the tennis academy founded by colleague and longtime rival Rafael Nadal, was the subject of death rumours on Twitter.

A number of ‘verified’ accounts on Twitter shared the news of Federer’s alleged ‘accident’, suggesting he was in “critical condition.”

The article in question, however, was published when Federer was physically present at Rafael Nadal’s academy, where the Swiss helped promote the Spanish Superstar’s programs for training children. There is no doubt that the news is completely false and the photo included was that of a 2014 Singapore car crash, and Federer is, in fact, hale and hearty.

Simonya Popova wasn’t the first time Sports Illustrated decided it was a good idea to make up an imaginary player just so they could get cheap publicity.  And when it comes to famous sports hoaxes, nothing stacks up to the legend of New York Mets pitching prospect Sidd Finch.

Setting the gold standard, the Finch lie became popular after Sports Illustrated writer George Pimpton created the character for an April Fool’s Day issue of the magazine. Finch, whom Pimpton described as having a 168 mph fastball, never actually came to existence, yet there were some out there who believed a human could sling a ball faster than a sports car.

Most people took the news that it was all fake with a smirk, although Mets fans had to be a little upset they weren’t getting a pitcher against whom no batter stood a chance.

Check out: 8 Controversy Kings of Cricket

Share this on WhatsApp
hoaxes Kyle Kendrick Paralympics Roger Federer Simonya Popova sports
Share. Twitter Facebook Google+ Pinterest LinkedIn Tumblr Email
Previous Article5 Adventure Sports You Should Try At Least Once In Your Life
Next Article Kabaddi In Olympics? The Dream Is Not So Far Away!