You are at:Home»Generic»From Winning Five Filmfare Awards To Co-Owning A Football Team, Ranbir Kapoor Has Gone A Long Way

By Aurobindo Dharsaun on April 3, 2017 0 Comments
Share this on WhatsApp

Ranbir Kapoor is an Indian actor and producer, who has become one of the most popular celebrities and one of the highest-paid actors in India over the course of his career. He is the recipient of several awards, including five Filmfare Awards.

What we’re more interested in, however, is Ranbir’s love of Football. Bollywood celebrities usually adhere to punishing schedules and hectic routines, but they’re never too busy to take time out for some fun, especially if it’s for a good cause. Ranbir’s cause has been promoting Football in India.

In addition to acting, Kapoor is a Football enthusiast and supports various sports charities and organisations. He is the vice-captain of the All Stars Football Club, a celebrity Football club that raises money for charity. In March 2013, he played the game to raise funds for the Magic Funds Organisation, an NGO for underprivileged children.

Along with the chartered accountant Bimal Parekh, Kapoor acquired ownership rights in 2014 for the Mumbai-based Football team of the Indian Super League, named Mumbai City FC. Ranbir is the campaign ambassador for NDTV’s Marks for Sports, a nationwide initiative to promote fitness and health in India.

In 2016, he featured in the documentary series Girls with Goals, to create awareness about and raise funds for YUWA, an all-girls Football team in the state of Jharkhand.

Getting Bollywood to invest in Football… 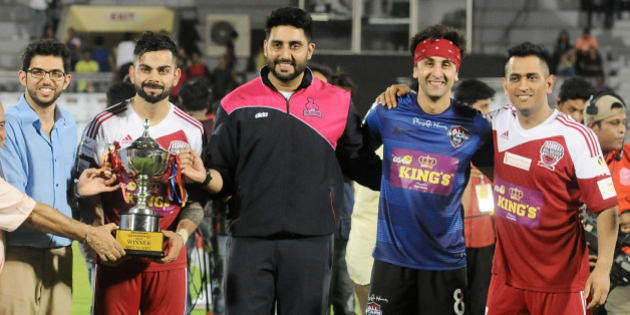 Ranbir  believes Bollywood celebrities’ involvement in sports in the country is beneficial in many ways. Apart from Ranbir, the ISL has star team co-owners such as John Abraham and Abhishek Bachchan, while Varun Dhawan endorses the Goa team.

“It’s a great thing, and every sport should be encouraged in the country. Cricket is our first love, but that doesn’t mean we should not give kabaddi or Football a platform. More than anything, you are giving opportunities to the youth to become a Football player or kabaddi player and not necessarily a cricketer”

Ranbir stats that everyone involved in the ISL should strive to make the league engaging and hopefully it will lead to the creation of a very good Indian football team.

“It’s about the quality of the game and how well Star Sports markets the game. All the people who are involved – like IMG Reliance, Hero, franchise owners and everyone, wants to put their best foot forward and create a league that is engaging and entertaining and has quality Football. Hopefully we can have our own Indian Football team which can play in the World Cup”

When asked what is the one quality about Ranbir that he admires, India’s Football icon Sunil Chettri had the following to say:

He is a great guy. When we meet, we talk about sports. And I have never felt that I am meeting an actor. What I like about him is that even though he is popular, he is quite humble. I like this about John Abraham and Abhishek Bachchan too; they have the same attitude. They are also heavily involved in football and love the sport completely.

That is high praise indeed from someone who has played the sport of Football at the highest levels for India.