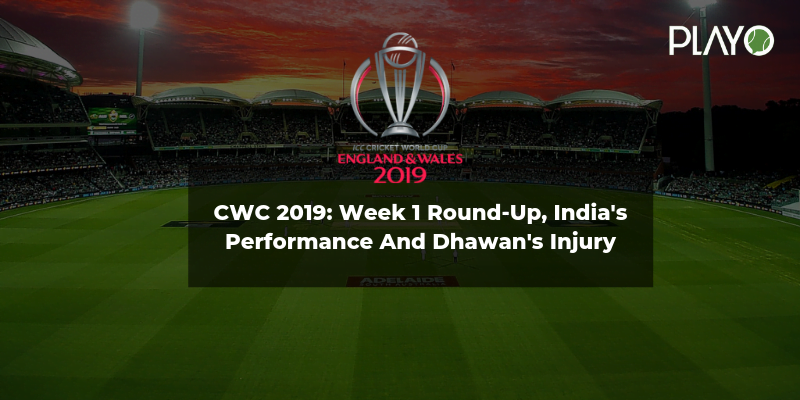 Dimuth Karunaratne (52*) stood like a lone crusader to post 136 for Sri Lanka. Matt Henry and Lockie Ferguson scalped three wickets each. Martin Guptill (73*) and Collin Munro (58*) chased it down within 17 overs.

A close encounter between Australia and Afghanistan that nobody expected! Rahmat Shah (43) and Najibullah Zadran (51) took charge to post 207. Pat Cummins and Adam Zampa picked three wickets each. Aaron Finch (66) and David Warner (89*) won it in 35th over.

Soumya Sarkar (42), Shakib Al Hasan (75), Mushfiqur Rahim (78) and Mahmudullah (46*) posted 330/6 against the Proteas. In reply, Faf Du Plessis scored 62 and the entire middle order contributed in the chase. But it wasn’t enough as Bangladesh won by 21 runs.

Another high scoring match between Pakistan and England saw Pakistan scoring 348/8 with the help of Babar Azam (63), Mohammad Hafeez (84), and Sarfaraz Ahmed (55). Three wickets each from Chris Woakes and Moeen Ali went in vain. Two centuries from Joe Root (107) and Jos Buttler (103) couldn’t save England and they lost by 14 runs. Wahab Riaz took three wickets.

Kusal Perera’s 78 helped Sri Lanka to somehow post 201 runs on board. Mohammad Nabi ran through the Lankan batting order to scalp four wickets. Dawlat Zadran and Rashid Khan picked two each. Post rain the target was revised to 187 in 41 overs. But Afghan batters failed miserably apart from a 43 from Najibullah Zadran and they lost by 34 runs.

Shakib Al Hasan’s 64 and additional small yet valuable contribution from the middle order helped Bangladesh to put 244 on board. Matt Henry continued from where he ended and had a four-wicket haul. Ross Taylor (82) guided the chased along with Kane Willamson (40). The Kiwis finally won it by two wickets.

Current title holders met yesteryears’ champions in the 10th match. Although Steve Smith (73) tried to carry the innings, he didn’t get help from other teammates at the top. Alex Carey (45) and a brilliant Nathan Coulter-Nile (92) at the end managed to post a competitive 288 for the Aussies. While Carlos Brathwaite scalped three, Thomas, Sheldon Cottrell, and Andre Russel took two each. West Indies fell short of 15 runs even after efforts from Shai Hope (68), Jason Holder (51) and Pooran (40).

Due to heavy rain, this match was cancelled without a ball being bowled.

Jason Roy’s 153 saw England posting yet another 300+ total. Bairstow (51) and Buttler (64) were instrumental as well and the final total was 386/6. Shakib Al Hasan (121) yet again put effort by scoring a century but no other big scorers from the line up saw Bangladesh innings getting finished on 180. Archer and Stokes took three wickets each.

Another low scoring fixture from Afghanistan saw yet another failure of their batters. Hashmatullah Shahidi stayed till the end to score 59 and single-handedly put 172 for Afghanistan. With Ferguson taking a four-wicket haul, James Neesham opened his account with five scalps. Aftab Alam gave initial blow and ended with three wickets but the target was too small to chase down. Williamson (79) and Taylor (48) yet again did it for the Kiwis and won by seven wickets.

India, batting first set a target of 353 for the mighty Aussies. Shikhar Dhawan (117) and Rohit Sharma (57) prepared the based on which Virat Kohli (82) played the anchor. Hardik Pandya (48) provided end fireworks and India were 352/5. Warner (56) and Steve Smith (69) did try to gain momentum after a slow start. Carey’s unbeaten 55 at the end was keeping the hope alive for them too. But Indian bowlers were too efficient to give chances! Bhuvneshwar and Bumrah, both picked three wickets each to hand over a precious win to India by 36 runs.