You are at:Home»Events»Cricket World Cup: From The Vault- A Rivalry Which Refuses To Dwindle 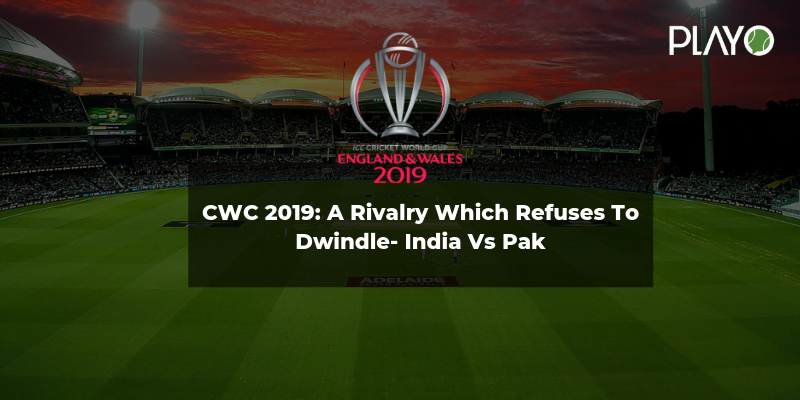 Cricket World Cup: From The Vault- A Rivalry Which Refuses To Dwindle

One of the biggest and bitterest rivalries in sporting history will take centre stage on Sunday when India and Pakistan will lock horns in Manchester. The tickets for this marquee World Cup clash, which might end up being another rain-curtailed one, are being offered at more than 10 times of the base price at secondary ticketing sites. Because of the recent political turmoil between both these nations, armed forces will be a part of the proceedings at the Old Trafford. Armed Forces for a game of cricket? Yes, you read that right!

Overall, India’s win percentage against Pakistan is a shade over 41% (54 wins out of 131 ODIs). If you have started watching the game in the last decade then you might not believe this. Pakistan have had a tight lid over India over a long period of time. But the scenario has always been lopsided in World Cups. Both sides have collided in the quadrennial event 6 times and India have gone on to win each of these memorable clashes.

Here is a list of each of these riveting clashes:

17 years since the inception of the Cricket World Cup, India and Pakistan finally went head to head in the 5th edition in Australia. India were winless in the tournament up until this point while Pakistan had a solitary win in 3 games. India rode on Sachin Tendulkar’s unbeaten 54 and a quickfire 26-ball 35 by Kapil Dev to finish with 216 for 7.

Kapil, in the company of Manoj Prabhakar, pegged Pakistan early in the chase before Aamer Sohail (62) and Javed Miandad (40) resurrected the innings. Tendulkar got rid of Sohail and the floodgates opened. Pakistan crumbled under pressure and were eventually bowled out for 173 to give Azharuddin his first World Cup win as a captain. A rivalry which went on to spiral over the next 3 decades was born.

A young Ajay Jadeja (45 off 25 balls) stepped on the gas and took on Waqar Younis, one of the most feared bowlers during those times. He would provide the perfect impetus which complemented Sidhu’s classy 93 at the top perfectly to help India post a mammoth 287 for 8. Aamer Sohail was at the forefront of an extraordinary response by Pakistan before he exchanged pleasantries (read explicites) with Venkatesh Prasad (3 for 45).

The lanky bowler responded in perfect style by uprooting Sohail’s off stump the very next delivery. In a telling spell, he struck two more times and suddenly Pakistan slipped to 132 for 4 from 113 for 1. A robustic start came to a screeching halt as Anil Kumble brushed past the lower order to restrict Pakistan at 248 for 9. Not the perfect send off to their legendary batsman Javed Miandad.

3 years since that memorable confrontation with Sohail, Prasad lost a bit of pace but his competitiveness and fierceness did not drop one bit. Defending India’s modest 227 for 6, thanks to solid fifties from Rahul Dravid (61) and Azharuddin (59), Prasad rattled a Pakistan side who were rebuilding after their star batsman Miandad’s exit. He gave India the key wicket of dangerman Saeed Anwar (36) and trapped Inzamam (41) and Saleem Malik (6) in front to have Pakistan reeling. Fittingly, he captured the final wicket to give India a comfortable 47-run win while finishing with career-best figures of 5/27. The win came at a time when both countries were officially in a state of war. For Indians fans, it meant much more than a win.

This was Pakistan’s best performance with the bat against India in a World Cup game. They posted 273/7 courtesy a sublime ton by Saeed Anwar (101). Out came Tendulkar. An attack consisting of Wasim, Waqar and Shoaib would send shivers down the spine even to the best players in their pomp. But not to Tendulkar. He was unfaced. Focused. He smacked Akhtar for 18 runs in his opening over which included a thunderous six over thirdman and two exquisite boundaries.

The rest, as they say, is history. He would go on to play what most say was his best knock in Indian colours. Eventually, after fighting a bout of cramps, he fell to Akhtar but not before he laid a perfect platform for an easy chase with a belligerent 75-ball 98. Dravid and Yuvraj played sensible knocks to overhaul the steep total with 26 balls to spare. Talk about being comprehensive. The game had a sense of inevitably attached to it. Pakistan couldn’t get past India when it mattered the most.

Arguably the most anticipated game ever played on Indian soil. With a spot in the finals at stake, India and Pakistan met in a semi-final for the first time. After the initial fireworks by Sehwag (38 off 25), almost customary during those times, Sachin (85) lived a charmed life to help India finish with 260/9. Pakistan’s approach was bland during the chase. They left too much work for too late and were stifled by the Indian bowlers before getting bundled out for 231. The margin of defeat was 29 runs, the lowest deficit in their World Cup history. But it was still a loss. India would later go on to lift the trophy after a drought of 28 years.

After scoring a dull 21-ball 9 in his World Cup appearance against Pakistan, Virat Kohli (107) wasn’t going to miss out again. Not when he had established himself as the best batsman in the world in the intervening period. He added 129 for the 2nd wicket with Dhawan (73) before upping the ante alongside Suresh Raina (74) in a brisk 90-run stand to set up a daunting score of 300 for 7 for India. Pakistan, reeling under an enormous period of transition, were staring at yet another defeat when they lost half of their side with only 103 runs on the board. Mohammad Shami brushed past the tail to record career-best figures of 4/35 and Pakistan slumped to a colossal 76-run win as they were bowled out for 224 in the 48th over.

On paper, India are heavy favourites to make it 7-0. But, time and again, they are reminded about the shock defeat in the Champions Trophy final in 2017. To cut a long story short, fans from both sides of the border will anticipate a high-octane contest. For all the hype and hysteria, this clash will be as big as the World Cup final for the fans.