In badminton like most other racket sports, the smash is a very effective stroke. But to enhance the smash and its effect, even more, there is something known as a jump smash.

But keep in mind, this is not an easy stroke to master. It is not wise for beginners to try and tackle the jump smash. They should first focus on playing the simple smash perfectly before they can go on to learn the jump smash.

So what exactly is a jump smash? And how is it different from a regular smash?

How to master the jump smash?

Before learning the jump smash, make sure that you have mastered the regular smash. Trying to jump smash before knowing the basic smash is like running before walking.

Before hitting the jump smash, you have to make sure that you are in the correct position and that you are under and behind the shuttle well in advance.

Timing is key as if you are late and try the jump smash you can land up hitting the shuttle in the net or on the same side of the court.

Make sure that you are correctly gripping the racket in the forehand grip so as to ensure that the direction of the shuttle travels the way you wanted it to. Holding the racket too tight will be counterproductive and will result in a poor stroke.

Timing is very important as it determines how the stroke is played and the direction and depth the shuttle will travel in. The jump has to be taken in a way to catch the shuttle as high as possible. The lower you catch it, the less effective the stroke will be.

To push off the ground you have to use your racket leg. Your body should not be tensed and your muscles should be relaxed. Do utilise your non racket arm to take aim and balance your body.

Now gently push off the ground and bend your legs back. This should be a natural movement and not a forced one. Lifting the knees back helps in gaining power.

This is very important as after you play the jump smash regaining balance might at first seem like a task. But it is important to land correctly and in a balanced way so that you are prepared for the return if there is any.

The landing is important too. While in the air your legs will shuffle and your racket leg will come forward and you will land on it first.

Things to remember while playing the jump smash:

-Always catch the shuttle as high as possible.

-Learn to maintain balance while landing, hence start with a smaller jump to get the feel and idea of how exactly to maintain your body before you can jump higher

-Keep practising for this stroke to be played perfectly.

This video will guide you:

Do not be in a haste and practice this stroke before playing it in a match. 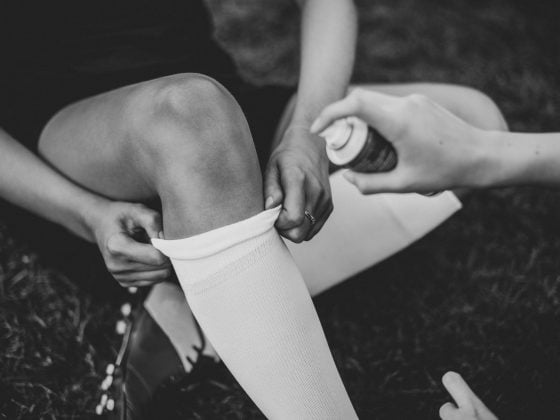 Were You Aware Of These 5 Facts About Stretching