You are at:Home»Events»CWC 2019: Week 2 Round-Up, Rains And India’s 7th Win Against Pakistan 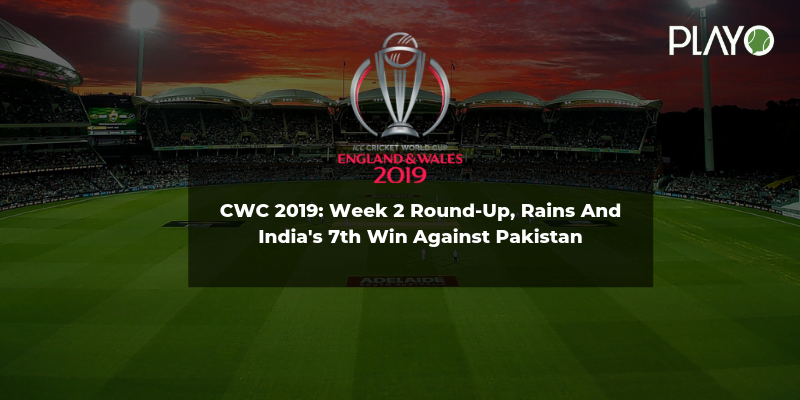 By Shreyasi Talukdar on June 18, 2019 0 Comments
Share this on WhatsApp

We have completed the second week of World Cup 2019. While there were some close matches, a lot were one-sided as well. The rain has been playing a spoilsport in this edition since the very first week. Matches are often being washed out due to rain and each morning fans now pray for the match to happen.

Eight overs into the match and West Indies started showing their dominance. Hashim Amla and Aiden Markram were already gone, thanks to Sheldon Cottrell’s brilliant spell. But with Quinton de Kock and Faf du Plessis on crease heavy rain stopped the match.

This match was abandoned due to rain without a ball being bolwed.

David Warner (107 off 111) and Aaron Finch (82) helped Australia put a massive 307 on board. In response, Pakistan were bundled out for 266 as Pat Cummins took three wickets and Mitchell Starc and Kane Richardson scalped two each. Imam-ul-Haq’s half-century went in vain.

This was a low scoring match that saw West Indies batting line up almost collapsed while Nicholas Pooran putting effort as a sole fighter. Pooran scored a 78-ball 63 with Chris Gayle (36) and Shimron Hetmyer (39) contributing. Jofra Archer and Mark Wood scalped three each and Joe Root took 2. While chasing 212 Joe Root played the role of a perfect all-rounder with a 94-ball 100. Jonny Bairstow scored 45 and Chris Woakes 40. They chased it down in 33.1 overs for the loss of two wickets.

Another high scoring match of this editing that saw Australia putting 334 for Sri Lanka on board. Finch played a captain’s knock to score 153 and was well accompanied by Steve Smith (73) and Glen Maxwell (46). Dimuth Karunaratne (97) and Kusal Perera (52) did try to put resistance but didn’t get much support by others. Starc ran through the entire middle order and picked four wickets while Kane Richardson and Pat Cummins took three and two wickets each.

The clash between the arch-rivals saw an entirely one-sided game. Pakistan put India to bat first without having any idea of what coming next. Rohit Sharma (140) scored his 24th ODI hundred and was well supported by his new opening partner KL Rahul (57) and skipper Virat Kohli (77).  Chasing 336 was never going to be easy for the current Pakistan team. Fakhar Zaman (62), Babar Azam (48), Imad Wasim (46*) put some efforts but those were not enough. Kuldeep Yadav seemed to have to get back his good form as he took two wickets and emerged as the most economic bowler.

The way he broke the partnership between Zaman and Azam was outstanding. Vijay Shankar, the new No.4 bat for India although wasn’t good while batting, was a revelation during bowling. He scalped two major wickets. Another two wickets were taken by Hardik Pandya. At one point due to rain Pakistan’s target was 136 runs from five over. For Pakistan, once again the star was Mohammad Amir. It was him who restricted India from putting 350 and finished with 10-1-47-3.