You are at:Home»Generic»Let’s Learn More About Fast And Slow Twitch Muscle Fibers 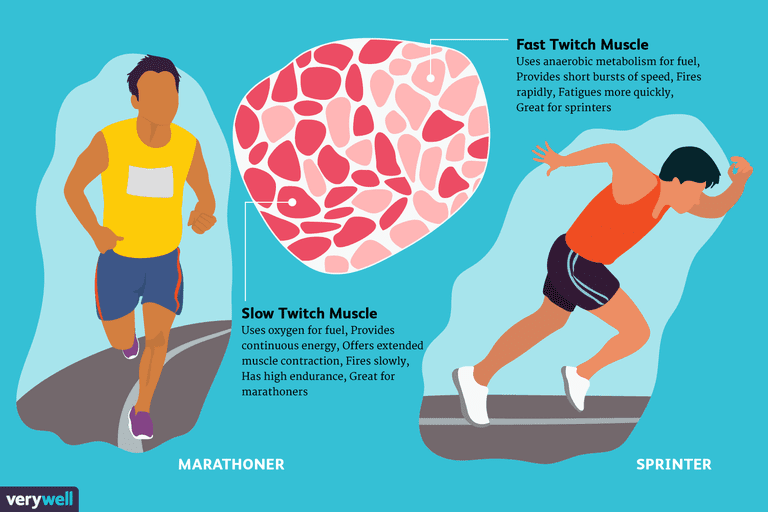 By Zaira Wadood on November 22, 2018 0 Comments
Share this on WhatsApp

A normal person has an equal amount of both fast-twitch and slow-twitch fibres.

A sprinter trains his fast-twitch fibres that react faster and generate explosive force. These go out of power quickly. Therefore, it is only logical for a marathoner to train his slow-twitch muscle fibres more because they are not as reactive and fast but they last for hours together.

So to answer the question again, fast-twitch muscles when trained become big and heavy and hence the sprinter looks muscular. On the other hand, slow -twitch muscle fibres even when trained remain slim and light which is why a marathoner appears to be lanky.

These muscle fibres contain mitochondria that use oxygen as fuel. These fibres are high in endurance and can generate moderate force over a longer period of time.

When a muscle is contracted to generate movement, these slow-twitch fibres get activated first. Fast-twitch muscle fibres are recruited only when the power needed is more than what slow-twitch muscles can generate.

If you dread high-intensity workout and prefer running over a sustained period of time and longer distances, you are slow-twitch dominant.

When it runs out, the body takes time to build it back. This is why they reach maximum capacity faster. The explosive force needed for weightlifting, sprinting and high-intensity workouts are all attributes to an athlete being fast-twitch dominant.

Moreover, genetics also play a part. Some people have a higher percentage of one of either one of these muscle fibres. This dictates what comes naturally to them.

Genetically, you might be bent toward one type of muscle fibre. This does not mean that you can’t improve the other. If you are slow-twitch dominant, there are ways to train and target your fast-twitch fibres. Let’s see how.

Let’s get back to the sprinter and the marathoner. Depending on the dominance of the type of muscle fibres, they appear and train differently. Both runners, yet different athletes!