CHESS RULES | It is truly a game of patience which has been tested of every player into it. Its rules are even more interesting but a little is known about them. There are few true fables of the past which speak of the birth of chess which has taken place in Asia.

Egyptian sculptures speak of games that are similar to chess. Thousand years’ old written documents for this game have been discovered. But this game of yesteryears is different from what is played today.

It has received a new look but sheen of the game and ideation remains intact. Chess portrays a war between two groups or persons: a battle of overpowering, which is as per the rules, laws, in a decent way, yet without clemency.

This can be witnessed from the rules of the game. And the following topic is something to do with it. I will be opening before the lesser-known rules of chess.

This leaves people, mostly the beginners perplexed when you make a move which is not known to them. They might end up saying, you have deceived them.

This is a move which is said to be effective when initiated as per the strict rules. It can only take place when neither the king nor the rook has moved any place during the course of the game. While making the move no other piece should be in between the king and the rook.

The king should not be in check position, either at the beginning of the move or due to the move. If these are the conditions then the king can move blocks towards the rook. The rook moves to space the king just moved through, or to the first space on the side of the king opposite the original position of the rook.

En-passant is assumed to be a quiet bomber (a lesser-known move) to outsmart your opponent. In this, a pawn captures another pawn. This can be possible when the opponent moves a pawn two squares forward from its original position.

If you have a pawn in a position that could have won you your opponent’s pawn if only the pawn moved a single space, you can take the help of the standard capture move, resembling the pawn being in that place. The opponent’s pawn is in captivity – en-passant, even though it was not in the square of which your pawn holds the fort.

En-passant can only be used for the move which directly follows your opponent moving the pawn two spaces forward.  No other chess piece can make the en-passant move.

This rule is a blessing in disguise for those who are in the grip of defeat. The rule mentions that if a move is repeated three times in the same positions (which may not be in succession) the match can be assumed as the draw, for which one of the players will have to claim it.

When pieces cross over the checkerboard they are elevated to kings, pawns which move across can be in the line of a promotion. Once the pawn makes it to the other end of the board, it might be promoted, replaced with any other piece, not the king. In general, pawns receive a promotion to the queen, because it is the most powerful tool in the game.

This can be done even if the queen exists in the game. Many people use a rook as the second queen, turning it upside down. This goes to show that pawns are considered more valuable than assumed.

Beginners again are not comfortable with this thought, which says that despite total domination, a stalemate is considered a draw in which points are equally distributed.

In this game of patience, players have to abide by the timing rules, they have to make the move in the allotted time or it can cost a player the match even if he/she is one point away from the winning the match. This goes to say that the player will be declared defeated.

So, after making a move, you have to press that button sticking out on the left of the timer provided; this ensures that the button on the right pops out. Don’t try to save time by moving your piece with one hand, and pressing this button simultaneously with the other. This displeases the referee as well as your opponent.

The rule specifically says that when it’s your turn, and you happen to touch your piece, then it must be moved (if it can be moved). If the opponent’s piece is touched by then you should capture it (if it can be captured).

If there is nothing a sort of this and your intention is only of adjustment, then you should mention that you are adjusting. Otherwise, you may end up losing the match.

Now having known these rules, engrave them in mind so you are not left fuming when in a match.

Tips To Conquer Your Opponent While Playing Table Tennis 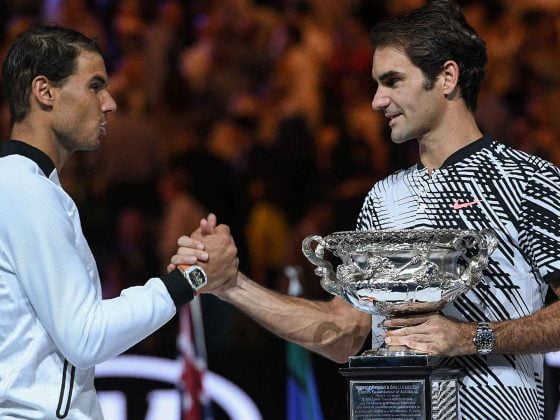 Can Rafael Nadal Surpass Federer To Become The Tennis Goat?