You are at:Home»Sports Desk»Football»Wondering How To Dribble Like Messi, We Can Help 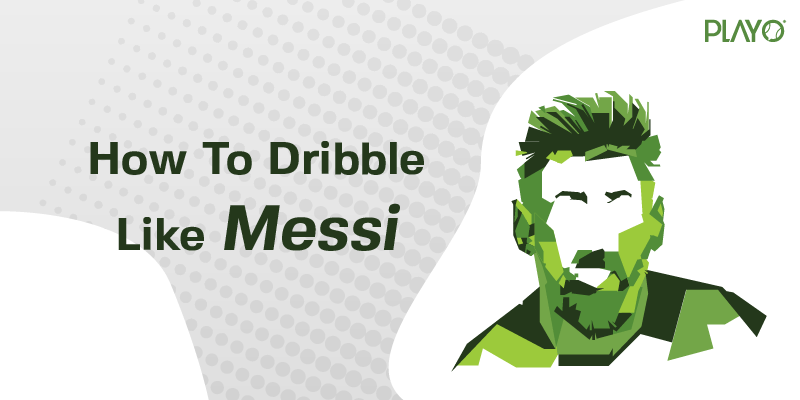 Wondering How To Dribble Like Messi, We Can Help

By Naveed on March 4, 2020 0 Comments
Share this on WhatsApp

A perfect dribble is merely playing the ball forward, passing through the narrow gaps between opponents, and going for a shot at the goal as effectively and creatively as possible. If you see a defender chasing you, you must outrun him with the ball at your feet; you can also catch him off guard by doing a skillset such as a body feint, stepover, or anything else. You could also try advance skills, which is usually pleasant on the eye but comes with its own baggage of losing possession.

Many think dribbling is a show, but it is much more, really. A great responsibility rests on the shoulders of that one player; whether to play it safe or to risk the ball and dribble, such perplexing thoughts shadow over the player who chooses to execute this bold act. His one decision could be pivotal and could add to the problems of the team or save them. There is a bottom rule for dribbling – don’t go dribbling when the ball is on your half of the field. However, when it comes to Messi, there are no rules.

The genius of Leo ‘King’ Messi

Another name for the Leo Messi could be ‘the dribbling God’; yes, he’s that good. If you want to see why, check out this phenomenal goal by Messi when he was just 19, against Getafe.

And now see this Copa Del Rey goal against Athletic Bilbao, in 2015; he was about 30-ish:

Since the time he commenced, he has played at the same level. Day in, day out; hardly anyone has been so consistent as him. This love, and spirit of his, married to his farfetched talent has won him 6 Ballon d’Or awards, more than anyone ever!

Better ask what not – Messi is exceptional in every way – be it his impeccable, granular precise dribbles, assists, or goals – he is the best the game has ever seen, or perhaps ever will see. However, there are two prime details in his dribbling technique that discerns him from other players. One, the position of his foot when he touches the ball.

Messi’s toe aims to the ground while others point it towards the goalie or the intended shooting direction. Second, the timing of his feather-like touch; Messi touches the ball when it is aligned to the centre edge of his body. He touches it “late.”

You just cannot, not if you have the willpower and a determination of a lazy tom. Messi has reached GOD-level after more than a decade of practice and commitment. Day in, day out, he has sacrificed unthinkable in order to become what he is today. He said, “I start early, and I stay late, day after day, year after year, it took me 17 years and 114 days to become an overnight success.”

Messi is a master of dribbling; in fact, you can sit down and watch him while you learn; and to be very reasonable, there is one in a million possibilities that you could do it. But there is still one.

Here are some things you could do to dribble like Messi:

The faster you are, while dribbling, is when you are the most unstable. Pace and ball control often cross each other’s path. But then when it comes to Messi, the rules of nature don’t apply; well, not really, but they do twist for Messi, thanks to his brilliance.

He has a great balance and works his body weight to counter the forces exerted by opponents while challenging him. He keeps the ball in possession with his delicate, short, and frequent touches while sprinting at high speeds.

He employs his strength to maintain stability and match shoulder to shoulder with the defender. It would help if you learned this, too, using your body weight to your advantage; it will get you one step closer to your goal of being able to dribble like Messi.

Messi and other extraordinary dribblers keep the ball incredibly near their body as they move, as though it was glued to the feet. To assemble your near-perfect dribbling abilities, work on winding through cones as fast as you can. You’ll compel yourself to control the ball and keep it near make it around the cones without going all wonky.

While it may look easy, it’s but challenging to keep the ball close while you stroll around, yet it’s even harder to do it at a full dash. Step by step, develop your speed and your dribbling ability, focusing on touch and close control. It is going to take a hell of a practice.

It’s practically uncalled for, Messi is an extraordinary dribbler to some extent because of his short height. Not, so tallness makes you a zippy dribbler. However, Messi takes more steps per dribble than other good dribblers, and it is easier for him to keep the ball close, making short minimal speedy strides as he moves.

Tall players can do something very similar. Nevertheless, it’ll take practice, a lot of it, to focus on slightly crouching, and remaining over the ball.

Speed is one of the significant keys to Lionel Messi’s style of play; other is his exceptional ball control. Having the option to keep the ball close at quick speeds is the thing that distinguishes Messi from ordinary players. Time yourself and work on getting your time quicker, starting with one end of the field towards the other.

#5. Shield the ball with your body:

Put your body between passes that you get and any defenders around you. Turn your hip or your back to the barrier and attempt as much as you can to shield the ball from them. Messi will frequently, as of now, have his eyes up and investigating his shoulder at a rival when he traps the ball so that he could use his body to shield the ball and remain in possession.

Keeping your eyes up, choose which course is bound to permit you enough space to move around the protector. Messi’s hips won’t lie; look intently at the defenders to see which course they’re turned and what they will do next. It is kinda about predicting movements. Acquire the protection by stepping the other way you need to go.

Control the ball with the foot that coordinates the heading. You’re in the end going to proceed to make a stride with the other foot. Messi’s move happens so briskly that it’s barely noticeable, which is the reason it’s so effective against defenses.

Essentially, to juke out a defender, Messi makes one falter stride in the phoney course, bluffs and then dribbles in the inverse with the outside of his foot.

#7. Explode: Drop it into high gear when you decide to switch direction.

You must keep in mind that it may look easy when Messi does it, but his skills and talent are inborn. No wonder they say Messi is from another planet. It is in his genes, unlike you. And to get even close to Messi, you will need years of right training, unshakable perseverance, and determination. Hope you get there, good luck!